Walking through the streets of Old Town, and past the doors of The Basilica of Saint Mary at 310 South Royal Street, it is easy to get a sense of history.

The parish, founded in 1795, has a colonial history. It was the first Catholic parish in the Commonwealth of Virginia. It is from St. Mary's that many smaller mission churches began and went on to become their own parishes. Each step of the way through this history, the education and spiritual development of the parish children has been a top priority.

Pastors, parents and parishioners have had a commitment to education from the start. Dating back to the first half of the nineteenth century, there were several attempts to establish parish schools. St. John's Academy, the Brothers' School, and St. Mary's Academy, while not parish schools, were all private Catholic schools with a very close association to St. Mary's and its pastors. When the Sisters of the Holy Cross opened St. Mary's Academy in 1869, the pastor made an agreement with the Sisters that they would also help fulfill the need for a free parish school. That same year, two Sisters started St. Mary's Catholic School-- a free school for all parish children. 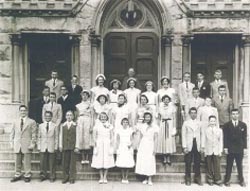 At first, the school operated from St. Mary's Hall, a large brick building at the corner of Royal and Wolfe Streets (today it is a parking lot). In 1870, there were twenty girls and twenty boys enrolled. The school had two separate classrooms on the first floor. One was for the girls, and the other was for the boys. Classrooms had pot-bellied stoves (the students rotated seats so they would not overheat!), and the only plumbing was outdoors. There was no real playground for the children, so, at recess, Royal Street was closed to traffic and the students emptied out into the street to play. At the top of the building was a cupola that housed the school bell. This same bell, cast in 1811, can be found in the cupola at St. Mary's School on Green Street today.

School population swelled, and by the 1940's sixth and seventh graders began to attend their classes in the Lyceum on Duke Street. At that time, the school was still free, being underwritten by parish contributions. Wartime restrictions prevented the construction of new school space, but by the end of WWII plans were firmly in place for a new and bigger school building. A large plot of land which had once been "Pullman Farm", originally purchased for the expansion of St. Mary's Cemetery, became the site of what is today's school at 400 Green Street. 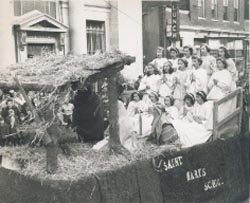 Construction on the "new" school began in 1948, and moving day was March 1, 1950. The school had 12 classrooms, a library, principal's office, teachers' lounge, clinic, cafeteria, and a multi-purpose room when it opened. Enrollment that year was 512 students, and the school population continued to build as postwar "baby boomers" reached school age. The population peaked in 1962-1963 when there were 1,170 students enrolled. To better meet the needs of the growing school population, the west wing of the school was added in 1952, with five classrooms and a kindergarten.

Up until this time, the school was staffed by teaching Sisters of the Holy Cross who lived in the small convent on Fairfax Street. By 1954, it was necessary to hire lay teachers, and a new convent was constructed adjacent to the school for the teaching Sisters. The new convent served as a residence for the Sisters until it was converted to a Junior High in the mid 1990's. This building, known as Stephens Hall, was renovated again in 2011, becoming today's Middle School for grades 6-8. 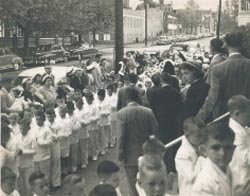 Additional changes and improvements to the school also included the building of Monsignor Wingler-Ella Hill Hall (also known as "the gym"). A large portion of the costs of construction were covered by a generous donation from lifelong parishioner, Miss Ella Hill. Upon her death, she had willed her house on Lee Street to the parish, and the pastor, Father Wingler, earmarked the profits from the sale of her house for the construction of the gym. Over the years, the gym has been central to the school and parish life, offering a place for daily gym classes, HSA fundraisers, school dances, Sunday Children's Mass, musicals and productions, science fairs, CYO basketball, and large parish events.

As we look ahead, there promises to be more changes for the school. We are constantly evaluating the needs of our student population in a effort to deliver the best Catholic school education possible. There will be continued and ongoing upgrades in technology, reviews of the best instructional tools and programs available for our students, and further improvements to our facilities. While much has changed over the years, much has also remained the same. Parish school education has been central to St. Mary's for nearly 150 years. Throughout all the years, and all the changes, our mission has remained constant...to lead our children to Christ. We look forward to more changes ahead, while celebrating the traditions and accomplishments of the past that make us St. Mary's. 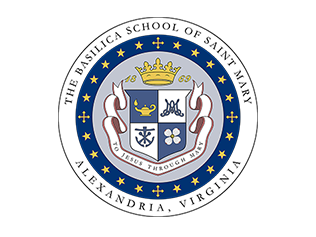 On Sunday, January 14, 2018 Bishop Burbidge announced that St. Mary Catholic Church has been granted the title of 'minor basilica,' making it the first basilica in Northern Virginia, the first in the Catholic Diocese of Arlington, and the 84th in the United States. This announcement was made by Bishop Burbidge following the 8:30 AM Mass on Sunday, January 14, 2018. We were blessed to have the Bishop celebrate the Mass with our parish and to join us to deliver this special announcement. Please visit the parish website for more information on the Basilica and its significance.

This is an exciting time for our school, the largest apostolate of the newly appointed Basilica of St. Mary. We are part of a parish that now holds a special bond of communion with the Holy Father.

We are pleased to announce that St. Mary Catholic School will now become The Basilica School of St. Mary. This is a great honor and distinction for our school.